Sorry about the radio silence for the last few weeks – we’ve had school holidays, (still two more weeks to go), an out of town jaunt and yes, a bit of slackness. Anyway, we’ve recently had a couple of emails from home asking if we’re still alive, (perhaps in light of the riots that keep cropping up), and yes, we are. Yay! Generally the demonstrations that have garnered international airtime are well advertised and as we know there’s a high probability of them turning ugly, we just stay out of the way. Unfortunately, a down side to the upcoming Pope’s visit, (more about that next blog), is the likelihood of more riots, but there will also be a LOT of extra security so we’re not expecting any major problems. Fingers crossed.

A bigger issue loomed on Friday when we arrived home to find four fire trucks outside our building. It turned out that they’d just put out the fire in the neighbouring apartment that shares a wall with Charlotte’s bedroom. Not so yay and a lingering whiff of smoke, but on the brighter side, it was sorted out very efficiently with no visible damage to the building and certainly no one hurt.

So – school holidays. These have meant spending some more time on the beach and one thing we keep seeing which ALWAYS makes me think “I have to put that on the blog” are the dogs, (and sometimes cats) that are on parade. I think I’ve already mentioned it, but throughout Copacabana, people live in apartments and whilst elsewhere this might mean they don’t keep animals, here pets are very commonplace and from what we witness, highly treasured.

Along with the pets, there’s a whole busy industry that we’ve also come to notice. There are dedicated dog walkers who take little packs of dogs for a walk in the mornings and afternoons and within our small block, there are two shops dedicated to shampooing pets and selling every sort of pet accessory you could think of. This includes little pet ‘strollers’ (prams), outfits, shoes, hats, hair clips etc. So knowing this, we shouldn’t be surprised by what we see when we go to the beach or walking along the streets. Of course it’s rare that I have a camera handy, and even rarer that I’m brave enough to pull it out, (learnt that one the hard way!), so these are the results of some bad photography…..

This cat WAS NOT happy – note its special stroller in the background.

And here are some photos I’ve pulled off the internet but which I’m positive are the actual animals we’ve seen when we’ve been out and about. 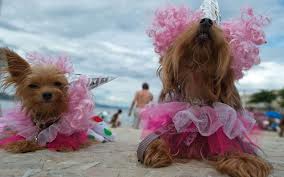 Tutus are very ‘in’ right now

Such a well trimmed face.

So not sure if the pets are actually, you know, happy – certainly some of them seem a bit overloved – but it’s a great spectacle for us!